March 27, 2017 – Vancouver, BC, Canada. – Dunnedin Ventures Inc. (the “Company” or “Dunnedin”) (TSX-V: DVI) today announced results from exploration undertaken in October of 2016 designed to find additional gold zones at its 100% owned Trapper property.  Trapper is a copper-gold porphyry project in northern British Columbia with results that include high grade visible gold flanking copper-mineralized porphyry in drill core, and gold drilled across 2.2 kilometres.  Highlights of the current survey include:

“We’ve now identified two main areas of gold mineralization at Trapper,” said Chris Taylor, Dunnedin’s President and CEO. “The first contains high gold values across more than three kilometres, with most samples originating upslope from past drilling and containing gold that must originate from new, untested targets.  This area generated strong gold values where drilled, and these new results suggest significant expansion potential.  A second area has also now been identified with consistently high gold values across two kilometres.  A drill hole completed within 500 metres of this target hit sulphide-rich porphyry style alteration, and the area was identified at that time as a priority for follow-up exploration.” 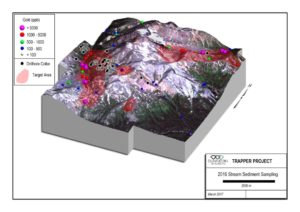 *Width represents core length and is not intended to reflect true width.

The second style of mineralization is copper-mineralized alkalic porphyry.  Samples returning up to 0.57% copper in bedrock and 2.5% copper in float have been collected at Trapper including both bornite-chalcopyrite copper sulphide mineralization, and azurite-malachite copper oxide mineralization.  These targets have not yet been directly targeted by drilling at Trapper, although copper-mineralized porphyry diking has been intersected in drill core, along with high-energy porphyry style hydrothermal breccias and porphyry style alteration.

The Company will next asses the gold grain content and mineralogy of the heavy mineral concentrates to characterize proximity to gold sources, and to map porphyry alteration and base metal zonation across the project.  This will allow sample areas to be prioritized for follow-up exploration.  Results will be released as work is completed.

During the 2016 program, gravel, sand and silt were collected from stream and talus sources across the project, and sieved to -20 mesh to produce a 10 kilogram concentrate from each sample site.  Samples were further processed using various density and magnetic separation techniques at CF Mineral Research Ltd. of Kelowna, British Columbia, to produce heavy mineral concentrates.  Each concentrate was partitioned into a sample sent for neutron activation assaying of gold content at Activation Laboratories Ltd. (“ActLabs”) of Ancaster, Ontario, from which the results in this release are provided, and a sample kept by the Company for further gold grain and mineral analysis.

The Company has also granted an aggregate of 325,000 stock options to consultants of the Company, exercisable at $0.37 per share for a period of five years.