January 18, 2017 – Vancouver, BC, Canada. – Dunnedin Ventures Inc. (the “Company” or “Dunnedin”) (TSX-V: DVI) is pleased to report additional diamond recoveries from the Notch kimberlite.  A third, 43.78 kg sample of Notch returned 4 commercial-sized stones (+0.85 mm) totalling 0.43 carats, for a sample grade of 9.72 carats per tonne. The largest recovered diamond was a 0.16 carat clear and colourless elongated octahedron.  Results are provided in the table below along with Dunnedin’s previous results, and an image of the largest diamond.

Figure 1: Image of the largest diamond recovered from the third Notch sample. 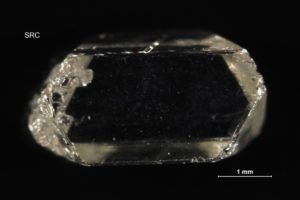 Chris Taylor, Dunnedin’s CEO, said, “Dunnedin has three main diamond exploration goals for 2017.   First, we aim to define 10 million carats of Inferred Resource at an average grade of more than 1.0 carat per tonne through additional drilling of the Kahuna and Notch kimberlites.  Second, we plan to bulk sample the Kahuna, Notch and PST kimberlites to assemble a package of commercial sized diamonds for valuation purposes.  Third, we plan to drill a number of new diamond indicator mineral sources that have been identified through till analysis which may represent new diamond-bearing kimberlite pipes and dikes.”

Current Notch results are from a sample randomly partitioned for additional geochemical study, which was visually similar to other samples of Notch, despite the very high sample grade.  Most of the Notch diamonds recovered by Dunnedin are clear and colourless variants of octahedra.  The Notch sample was treated through an autogenous mill-fusion circuit located at CF Mineral Research Ltd. of Kelowna, British Columbia, using a lower size cut-off of 0.425 mm.  Unlike standard DMS recovery methods, the circuit can recover nearly all diamonds present in a kimberlite to the predetermined cut-off size, along with associated indicator minerals.

The Company has also granted an aggregate of 1,260,000 stock options to directors, advisors and consultants of the Company, exercisable at $0.21 per share for a period of five years.

Kahuna is an advanced stage high grade diamond project located near Rankin Inlet, Nunavut.  Dunnedin is now recovering diamonds and indicator minerals from a series of kimberlite and till samples collected  during two seasons of field work.  An Inferred Resource released by Dunnedin showed over 4 million carats of macrodiamonds (+0.85 mm) at a grade of 1.01 carats per tonne had been defined along the partial strike length of the Kahuna and Notch kimberlite dikes through shallow drilling.  The largest diamond recovered was a 5.43 carat stone from the Kahuna dike which was a piece of a larger diamond that had been broken during the sample preparation process and was reconstructed as having an original size of 13.42 carats.  Recent results include a 0.82 tonne sample of the PST kimberlite dike which returned 96 macrodiamonds totalling 5.34 carats (+0.85 mm) and a 2.36 tonne sample of the Notch kimberlite which returned 89 macrodiamonds totalling 2.38 carats (+0.85 mm).  The Kahuna project is located adjacent to the development-stage Meliadine gold project of Agnico Eagle Mines Ltd and also hosts gold mineralization in metasedimentary units.