December 7, 2016 – Vancouver, BC, Canada. – Dunnedin Ventures Inc. (the “Company” or “Dunnedin”) (TSX-V: DVI) today announced it has increased the size of the Kahuna diamond project by staking an additional 59 claims totaling 66,047 hectares.  The project is now approximately 120,000 hectares (1,200 square kilometres) in size.  The Kahuna project now consists of:

The Company notes an increasing level of exploration and development activity in the Kahuna and Meliadine project area, with Agnico recently entering into mineral exploration agreements extending their land position into areas of Inuit-owned subsurface rights adjacent to Dunnedin’s claims.  Most recently, NxGold Ltd. (TSX-V: NXN, “NxGold”) announced a $35+ million earn-in deal for a 70% interest in a 8,473 hectare (85 square kilometre) land package adjacent to the Meliadine claims.  An updated claims map is provided below in Figure 1.

As previously announced (see Dunnedin news release of November 23, 2016), Dunnedin intends to undertake a plan of arrangement to spin out its gold and copper assets, consisting of the gold rights at the Kahuna project in Nunavut and its Trapper copper-gold porphyry property in British Columbia.  Further information including a date of record will be provided when details are available.

Kahuna is an advanced stage high grade diamond project located near Rankin Inlet, Nunavut, where Dunnedin is earning a 100% interest.  Dunnedin is recovering diamonds and indicator minerals from a series of kimberlite and till samples collected in summer 2015, and has completed a 1,100 till sample program in summer 2016.  The Company anticipates beginning a drilling and bulk sampling program in 2017 that will test potential extensions to recently published Inferred Resources, assemble a valuation parcel of approximately 1,000 carats of commercial-sized diamonds, and test a number of newly defined high priority kimberlite targets that have yielded populations of diamond indicator minerals. 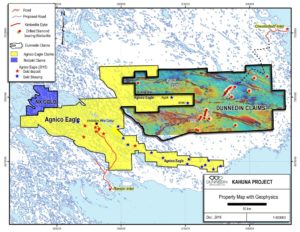 An Inferred Resource released by Dunnedin (see Dunnedin news release of January 26, 2015) identified over 4 million carats of macrodiamonds (+0.85 mm) at a grade of 1.01 carats per tonne along the partial strike length of the Kahuna and Notch kimberlites through shallow drilling.  The largest diamond recovered was a 5.43 carat stone from the Kahuna dike which was part of a larger diamond that had been broken during the sample preparation process and was reconstructed as having an original size of 13.42 carats.

On December 6, 2016, the Company granted 150,000 Options to a Consultant of the Company.  The Options are exercisable at a price of $0.195 per share for a period of two years from the date of grant. The Options were granted pursuant to the Company’s shareholder-approved stock option plan and are subject to the policies of the TSX Venture Exchange and any applicable regulatory hold periods.