October 26, 2016 – Vancouver, BC, Canada. – Dunnedin Ventures Inc. (the “Company” or “Dunnedin”) (TSX-V: DVI) today announced it has initiated a technical and strategic review of the Company’s 100% owned Trapper project located in the Sutlahine area of northern British Columbia.  Highlights include:

* Width represents core length and is not intended to reflect true width.

“The Trapper project has seen $4 million of exploration work, which generated excellent gold drill results and surface copper porphyry showings, but is outside of our primary focus on diamond exploration at the Kahuna project in Nunavut,” said Chris Taylor, Dunnedin’s CEO, “The property overlies an unusually gold-rich porphyry copper complex including drill-ready copper porphyry and gold-rich semi-massive sulphide stockwork.  Dunnedin is conducting a comprehensive review of this 100% owned project to determine how best to unlock its value for shareholders.”

The Ring Zone has been mapped as the sulfide mineralized halo to a gold-rich copper porphyry intrusion that has been intersected in drill core.  The zone has a diameter of over 6 kilometres and displays sulphide mineralization, hydrothermal brecciation and porphyry style alteration along its approximately 15 kilometre circumference, 10 kilometres of which are on the Trapper property.  The interpreted centre of the porphyry complex is entirely overlain by the Trapper claims. 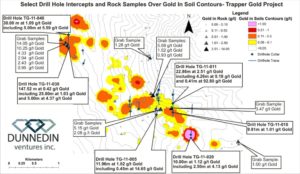 As part of its strategic review, the Company completed a 60 sample heavy mineral orientation survey at Trapper in October 2016 designed to analyze zonation of alteration and sulphide mineralization at various locations across the porphyry system.  Results will allow mapping of precious to base metal ratios across the project together with gold grain counts in order to prioritize areas for future work and to assist with three dimensional system-scale modeling of geology and mineralization.