A Large New Gold Belt At The Kahuna Diamond Project 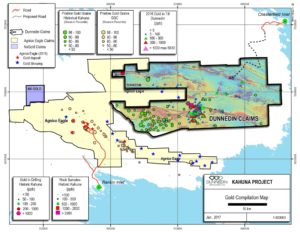 Figure 1: Gold grain counts across the Kahuna project based on historical till sampling and recent work by Dunnedin. Gold-in-till results are also provided for the Meliadine project based on publicly available information released by the Geological Survey of Canada (GSC). There is a strong association between gold-in-tills and bedrock gold zones at Meliadine.

Chris Taylor, Dunnedin’s CEO, said, “We have identified a large gold-mineralized belt tying onto Agnico’s Meliadine gold trend.  Results suggest gold is preferentially associated with internal fold hinges within the belt.  This pattern is observed at Meliadine, and points to several targets requiring follow up till sampling and drilling at Kahuna.  The area is known for hosting large, high grade gold deposits at the Meliadine project, and we are very encouraged that gold is confirmed to be associated with multiple belts across Kahuna.”

Locally sourced coarse gold was also confirmed through till sampling by Dunnedin at the main fold hinge of this belt in the vicinity of the PST and Notch diamond-bearing kimberlites, as shown in Figure 2.  The glacial transport direction and lack of grain modification point to sources at the Kahuna project rather than Meliadine, as disclosed by Dunnedin on October 17, 2016.  With its folded geometry, the new belt has an aggregate strike length of approximately 42 kilometres at Kahuna.

Figure 2: Example images of coarse gold grains collected from till samples by Dunnedin during diamond exploration, field of view is approximately 2 mm.

Gold encountered in historic drilling was largely incidental during diamond exploration, however six drill holes were assayed for gold and returned values as shown in Table 1.  Not all prospective drill intervals showing sulphide mineralization were assayed, however results are sufficient to confirm the presence of gold in bedrock of similar style to that observed at Meliadine.  Visible gold was noted in one of six drill holes at Kahuna and is also observed at Meliadine.

*width of the sample represents core length and not true width.  Historical drill hole results were obtained from various SEDAR filings of news releases and reports by past explorers including the Hunter Exploration Group.

97 rock samples collected across the property also returned between 0.05 and 2.52 g/t gold.  Till sampling confirmed gold-in-tills adjacent to areas with gold-in-bedrock samples, and in other areas.  Gold has been mapped as being associated with magnetically responsive formations that have been described as metasediment belts and regionally significant, deep seated shear zones.

84 of 129 (65%) till samples collected by Dunnedin in 2015 also returned gold results through neutron activation analysis of heavy mineral concentrates collected during diamond exploration, with subsequent confirmation of gold grains as shown in Figure 2.

Over 1,100 till samples collected in summer 2016 across 600 square kilometres of the 1,200 square kilometre Kahuna project are being processed for diamond indicator mineral content and gold grain content at CF Mineral Research Ltd. in Kelowna, British Columbia.

Dunnedin plans to pursue further gold exploration through a spinout company as announced on November 23, 2016 and is currently finalizing plans related to this announcement.

NxGold Ltd. (TSX-V: NXN) is exploring the Peter Lake project, also adjacent to Meliadine, and recently announced a $35+ million earn-in deal for a 70% interest in a 8,473 hectare (85 square kilometre) land package, and raised $4.9 million for exploration in the area.

Kahuna is an advanced stage high grade diamond project located near Rankin Inlet, Nunavut.  Dunnedin is now recovering diamonds and indicator minerals from a series of kimberlite and till samples collected during two seasons of field work.  An Inferred Resource released by Dunnedin showed over 4 million carats of macrodiamonds (+0.85 mm) at a grade of 1.01 carats per tonne had been defined along the partial strike length of the Kahuna and Notch kimberlite dikes through shallow drilling.  The largest diamond recovered was a 5.43 carat stone from the Kahuna dike which was a piece of a larger diamond that had been broken during the sample preparation process and was reconstructed as having an original size of 13.42 carats.  Recent results include a 0.82 tonne sample of the PST kimberlite dike which returned 96 macrodiamonds totalling 5.34 carats (+0.85 mm) and a 2.36 tonne sample of the Notch kimberlite which returned 89 macrodiamonds totalling 2.38 carats (+0.85 mm).  The Kahuna project is located adjacent to the development-stage Meliadine gold project of Agnico Eagle Mines Ltd and also hosts gold mineralization in metasedimentary units including a recently defined greenstone belt with over 40 kilometres of strike length that is associated with elevated gold-in-till results.