I would like to take this opportunity to wish you and your families all the best in 2017 and to provide an update on our progress at Dunnedin through the year that was.

We began 2016 with Dunnedin (TSX.V:DVI) trading at $0.04 and we were in the midst of financing our exploration and laboratory work for the year.[1] Our achievements include:

The discovery of gold adjacent to our diamond-bearing kimberlites at Kahuna, and a comprehensive technical and strategic review of our 100% owned Trapper copper-gold porphyry project in British Columbia, led us to conclude that the best path to maximum shareholder value is to house these assets in separate companies. In November, we announced our intention to spin the precious and base metal assets out of Dunnedin and are currently reviewing spinout mechanics and timing with management and counsel. All in all, it was quite a year – please read on for greater details.

By February 2016, Dunnedin announced closing of a second round of a private placement to bring total capital raised over the preceding two months to $922,000.

With funding in place, the Company achieved several notable goals. In March, we recovered high quality commercial sized diamonds from the Notch kimberlite.[2] In April we added diamond-specific expertise to our board with the addition of Claudia Tornquist, formerly of Rio Tinto’s diamond division, and Chad Ulansky, CEO of the diamond exploration company Metalex Ventures, an experienced diamond explorer who has worked on diamond projects in fifteen countries across four continents.[3]

By July, the Company finished processing till samples collected in 2015 and identified, for the first time on the project, kimberlite pipes that were sourcing diamond indicator minerals and would likely be sources of additional diamonds.

Figure 1: Notch Diamonds – Diamonds are what drew us to the Kahuna project and we were not disappointed when we began recovering our own stones!

In August, we announced appointment of Mr. John Robins, P.Geo., and Mr. Jim Paterson as Strategic Advisors to the Company in addition to a CDN$1.3 million non-brokered private placement.[1]

Hunter Exploration Group, a private company co-founded by Mr. Robins, was the original mineral tenure holder at the Kahuna project during the early 2000’s, when over thirty million dollars in exploration was undertaken in the area. John and Jim are two of the key principals behind The Discovery Group of Companies, of which Dunnedin is now a member. Through numerous discoveries, they have brought significant value to shareholders. Most recently the two were Chairman and Director, respectively, of Kaminak Gold Corp. from its founding through its eventual sale to Goldcorp for $520 million. John and Jim are actively engaged investors and advisors to Board and Management at Dunnedin, who bring high-value in their contributions to the Company.

By October we had concluded the 2016 Field Program at Kahuna. In the program, we collected 1,111 till samples across the length and breadth of the property. We will analyze these samples using mineral ranking techniques pioneered by our advisor, Dr. Charles Fipke, and originally applied at the original Ekati discovery. Dr. Fipke’s methods can predict the potential of kimberlites to host diamonds with a high degree of confidence. We expect this work to identify new kimberlite targets at the project that will be verified through upcoming drilling.[2]

a sample grade of 0.99 carats per tonne. The largest recovered diamond was a 0.23 carat clear and colourless octahedral stone.[1]

Gold! and Diamonds at Kahuna

By the end of October, we reported gold-in-till results from our 2015 diamond exploration program, and provided a compilation of historical gold exploration results at the Kahuna project. Metasediment belts including those that host gold at Meliadine have been repeated through regional folding and on-strike extensions at Kahuna, where they also host gold. Ninety-seven mineralized historical grab samples returning between 0.05 g/t and 2.52 g/t gold were collected across four metasediment and structural zones. Historical drilling targeting kimberlite encountered visible gold returning 7.24 g/t gold over 0.68 m along the strike extension of Agnico’s Aklak and Aquik Gold Zones of the adjacent Meliadine property, showing that gold mineralization is indeed also present at Kahuna. 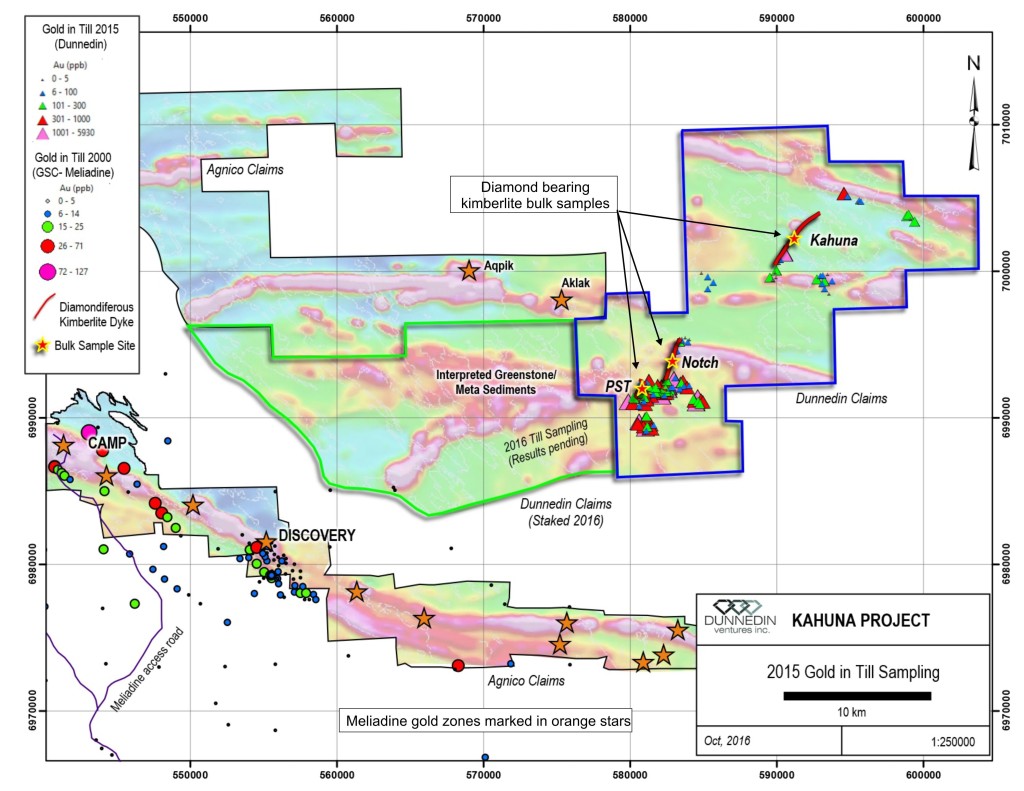 In October, the Company also announced the addition of Mr. Sorin Posescu, P.Geo, to our Board of Directors. Mr. Posescu is an accomplished explorationist and is also one of the underlying vendors of the Kahuna project. Sorin brings two decades of geological experience to the Company including a strong background in corporate strategy and geological modeling that will be of benefit to our shareholders as we further explore the Kahuna project.

Also in October, we began a strategic review of our 100%-owned Trapper Gold Copper Project in Northern BC. Trapper is a well-drilled 40 km2 claim package covering a gold-rich copper porphyry complex that has seen more than $4 million in exploration including 42 drill holes in a 8580 metre program completed in 2011. The program revealed visible gold flanking copper porphyry in drill core, including 34.11 m of 1.71 g/t gold. The Trapper property overlies a circular mineralized “Ring Zone” with over 10 kilometres of strike that surrounds a porphyry centre, with gold-rich polymetallic mineralization drilled to-date across 2.2 kilometres, and associated surface copper porphyry showings returning up to 2.5% copper.[1]

New Ground Staked at Nunavut along with historical data set

Encouraged by what we saw in Nunavut, we set out to secure additional claims and by December 2016 we had doubled the size of the Kahuna project by staking an additional 59 claims, bringing the project area to over 1,200 square kilometres. An updated claims map is provided below.[2] 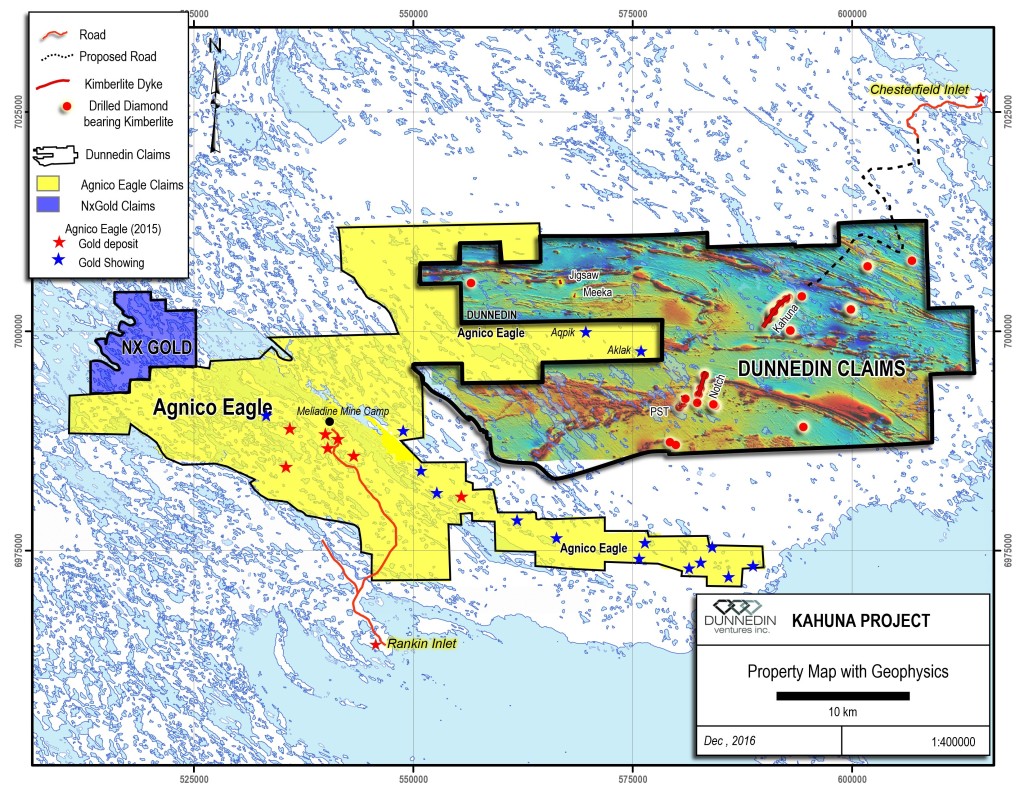 The Kahuna project now consists of:

We at Dunnedin have observed an increasing level of exploration and development activity in the Kahuna and Meliadine project area with Agnico recently entering into mineral exploration agreements extending their land position into areas of Inuit-owned subsurface rights adjacent to Dunnedin’s claims. Most recently, NxGold Ltd. announced a $35+ million earn-in deal for a 70% interest in a 8,473 hectare (85 square kilometre) land package adjacent to the Meliadine claims and raised $4.9 million for exploration in the area.

Figure 4: Agnico Eagle’s Meliadine gold mine, in development less than 10 kilometres from the Kahuna project

As an added “kicker” to cap-off 2016, we purchase a comprehensive proprietary data set consisting of historic diamond and gold exploration results from the Kahuna project. The data set compiles approximately $25,000,000 of historical spending in the project area undertaken by multiple exploration groups.[1]

Spin-out of non-diamond assets to be completed in 2017

Management and the Board at Dunnedin is understandably excited about the discovery potential of our diamond and gold/base metals assets and we strongly believe the best means of unlocking the optimum value for shareholders is to place them in separate companies with clear a clear focus the separate commodities. Therefore, in November we announced our intention to undertake a plan of arrangement to spin out the gold and copper assets, consisting of the gold rights at the Kahuna project in Nunavut and the Trapper copper-gold porphyry property in British Columbia. Further information including a date of record will be provided when details are available. [2]

In 2017, on the diamond side, Dunnedin anticipates a drilling and bulk sampling program that will test potential extensions to recently published Inferred diamond Resources; we will assemble a valuation parcel of approximately 1,000 carats of commercial-sized diamonds to determine what our stones are worth on a per carat basis; and we will test several newly defined high priority kimberlite targets that have yielded populations of diamond indicator minerals and appear ripe for new discoveries.

I consider myself, and our shareholders, extremely fortunate to benefit from the advice of such a strong group of proven industry experts who have a vested interest in Dunnedin Ventures. I welcome their well-seasoned guidance as we move Dunnedin — and our future sister spinout company — towards an exciting and prosperous future.

Mr. R. Bob Singh, P.Geo., Exploration Manager, is the qualified person responsible for the technical content of this document.